It is the year 20XX. Gigantic SPIDERS have taken over North America. With Canada as their spawning grounds, they overwhelmed the whole USA... except one state. In Texas, one HOCKEY team has risen to the challenge of taking the north back. But only if you honor your PLAYERS' contracts, keep the battle CROCS well fed & supply the COMPUTERS with energy. Good luck figuring that one out.

Win by using the Nuke Silo Facility in the Spawning States.  (Need energy? Fire some computers.)

Assign some Players or Crocs to a owned state to defend it against  the  possible spider attacks.

Send some Players or Crocs to loot a state. On a successful mission they'll come back with some sweet resources or some new friends. Each State has a set amount of loot. Try to move around the map before you run out of resources.

Send some Units to Scout the enemy's State, on a successful mission your squad will come back with some information,  either the number of Spiders currently in the State, the aggressivity level of the Spiders in the State or the danger level at which the State is right now.

Send some Players or Crocs to kill some spiders on enemy territory. Less Spiders in neighboring States means weaker attacks from Spiders in them. If a State has no Spiders left, you conquer it.

ATTACKING A STATE WILL INCREASE IT'S AND IT'S NEIGHBORING STATE AGGRESIVITY LEVEL!!

Use some energy to use a State's Facility.  Those have different effect, try them all.

Hockey Players are your basic units. If you ran out of them you lose the game. They are mostly useful in numbers or when used with a Crocodile. They cost a set amount of Bitcoins every turn. Make sur you have enough to  pay them, has some bad stuff might happen if you don't.

A Hockey Player's Perception increases the chance of succeeding a Scout or Loot Action.

A Hockey Player's Speed give him a higher chance of survival when sent in Spider's Territory.

Crocodiles are you most powerful Units. They cannot be sent out on their own, They need to be with at least one or more Hockey Players.    They cost a set amount of Food every turn. Make sur you have enough to feed    them, has some really bad stuff might happen if you don't.

A Crocodile's Strength increases    the chance of succeeding    an attack by a lot and increases the amount of Spiders that will die upon said success. It also increase the amount of defence he'll contribute to a State when assingned to it.

A Crocodile's Perception increases slightly the chance of succeeding a Scout or Loot Action.

A Crocodile's Speed give him a higher chance of survival when sent in Spider's Territory.

Computers can be used to do 2 things.   They can be sent on Scouting Mission they are even the best at it. Or, if they aren't sent out by the end of your turn, they will mine Bitcoins for you. They need energy to be powered up at the start of your turn.

A Computer's CPU  increases    the chance of succeeding    a  Scout Action by a lot.

A Computer's GPU increases the amount of Bitcoin it'll provide each turn.

A Computer's RAM give him a lesser chance to overheat and break when taking an action.

Energy is renewed each turn. It is used to Activate Computers or Facilities. You can gain more Max energy by taking more States.

BitCoins are the main currency of the game, it's used to upgrade most units' stats and to pay you Hockey Players. You can find a bunch by Looting or you can use your computers to farm some.

Food is used to upgrade the Strenght of Units and to feed Crocodiles each turn. Make sure you keep enough to feed your Crocs, you don't want them to get hungry and feed on your Hockey Players. You can find plenty by Looting.

Computer parts are used to Upgrade Computers' Stats. You can find plenty by Looting.

Ammunitions are used to Upgrade Units'  Perception. You can find plenty by Looting.

Fire Arms are the rarest around they are only used to Upgrade your Crocodile's Strength. You can find about 1 per State by Looting.

Game design was made by extrapolating from Random Articles generated on Wikipedia .

Watch us go through this process :

Join the Community on Discord :   https://discord.gg/qdBF2nM 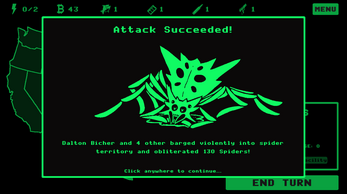 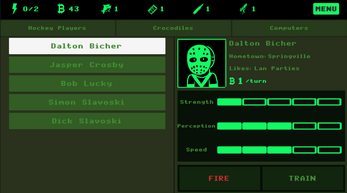 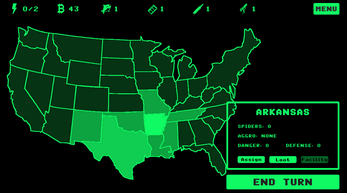